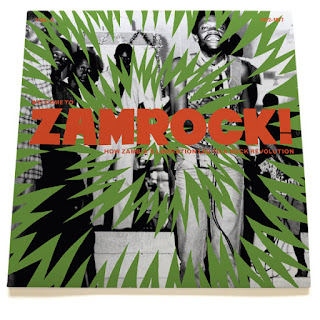 Mike Nyoni and Born Free - My Own Thing - Now-Again Reserve

This 2 disc on revered label Now-Again's Reserve subscription series continues the label's fascination with the Zamrock scene and sound. It's obviously a labour of love for label boss, Egon, and the care and attention lavished on the package serves to do justice to the music presented.

The context given by the accompanying literature gives a great insight to the geopolitical landscape of the era, Zambia's position on this landscape, and the journey between now and then for both the country and the artefacts of this scene.

Focusing on Mike Nyoni, this compilation distils three albums of music, both solo and with the Born Free band.

The sound is much tighter and cleaner than you'd expect based on the previous releases in the series. The guitar work is clear and melodic, utilising a blues/funk scratch rhythmic interplayed with a pickier lead to great effect across the first disc. A hermetic rhythm section drives the tunes with fierce power, and steady, rather than frenetic pace, the quoted influence of New Orleans funk easy to hear.

No washing fuzz or reverb, no wig out moments, just tight arrangements overlaid on strutting grooves. Nyoni's voice, whether singing in English or languages local to his enforcedly nomadic history, oozes sincerity, both on the personal and political songs. Given the tumultuous environment he wrote in, it's unsurprising that political themes resonated with such emotional depth.

Disc one ends with Chikwati Chata, where wah is applied to a recognisably Southern African guitar groove and lead melody, and drum pattern that will be familiar to anyone well versed in the last decade's worth of Afro-insert-genre-here re-issues and re-works.

Disc 2 is much more Nyoni's work with (The) Born Free band. Essentially their one album, with some singles from prior to this, the production is less sharp, the band looser, and the arrangements more open to freestyle sections.

The influence of Hendrix is more obvious - the instrumental Mad Man being a prime example of trio playing more to sections than strict structures. This is aligned more closely to the inspiration that Woodstock era 'classic rock'' had on the Zamrock sound overall, and documents the beginnings of an artist finding his place within a movement, before the further self-definition outlined on the previous disc.

Overall this is a great collection of works presented with an educational package worthy of inclusion on any official syllabus that you could align the outcomes to. The socio-political climate of the country, the region, the post-colonial upheaval, a nation's leader trying to exert independence and support the rights of Africans within their own countries to self-rule, the conflicts and hardships this caused for their people, and how a generation of musicians interpreted and expressed this through a lens of optimistic post-hippie ideals. Rock transported from the civil rights US to an independence seeking African country, funk born of this and forged with peacenik ideas, this is a story worth telling, and worth your time hearing.