Acouchristo is a musician, sound designer and collector of moments. He blogs at acouchristo.wordpress.com.


Recently he has set up a project inviting people to send in field recordings that will be put in to a podcast curated by Acouchristo.

The project is called Salmon Jacket Scrapyard and you can send in recordings via email to salmonjacketscrapyard@hotmail.com.

The facebok page is here - SalmonJacketScrapyard

As well as being a prolific creative mind he also enjoys to go to gigs and has kindly written a beautiful review for the Non-Classical event 'Rise Of The Machines #2' at Village Underground. 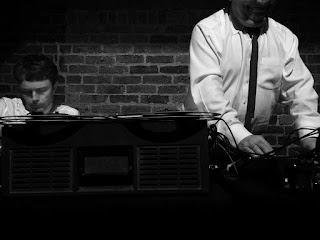 I spend much of the day walking around Shoreditch and Brick Lane soaking up the atmosphere and trying to stay warm. It's one of my favourite places to wander round with headphones on, lightly listening through the entire of Pink Floyd's early back catalogue and letting it wash over me, mixed in with the sounds of London hustle and bustle. After five hours of this and some Vietnamese food, my friend and I walk along to the outside of the Village Underground – a decidedly normal looking doorway in to a building with an old disused underground train carriage mounted on the top.


Upon walking in to the Village Underground we see the space is beautiful – with over arching brick work, and an atmosphere the makes me think I'm underground in the 1940's – I most certainly feel hugged by the warm atmosphere.


The stage is set for the orchestra and also we notice some tables off to the side with lots of tape machines as Gabriel Prokofiev treats us to a DJ set to get us in the mood. Light, staccato, electronic rhythms bounce over the audience dancing with the beautiful lighting set up at the back of the stage – this is exactly what I was hoping for already!


The night begins with a performance of 'Cortical Songs' – a four piece movement by Nick Ryan and John Matthias for strings and solo Violin in which the players are partially controlled by a computer 'brain'. This is actually less discordant than I had expected. Beautiful lush movements and sporadic solo violin duet with each other. A lovely piece to hear however the view of the LED lights clipped to music stands which triggered the players was somewhat obscured. The performance was brilliant but seeing more of the 'brain' interacting with the orchestra would have added another lovely dimension. 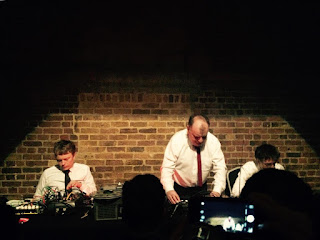 Moving straight on, spot lights direct our attention to 3 men stood at the aforementioned tables covered in all sorts of items from tape machines to toy cars. This would be the Langham Research Centre. The players play along to a tape player with a carefully composed collage of sound, adding their live sounds from objects that are connected to contact mics. The sound is amazingly rhythmic and impossible not to listen to. It’s so great to see these three people carefully performing from written manuscripts with these found objects that give a distinct nostalgic feeling. Almost like geeking out at university, take your general rave environment and replace the techno with Langham Research Centre and you get the picture! A gig I'm not going to forget in a hurry – nor would I want to for that matter!


Next up is a piece inspired by Charles Babbage's Difference Engine No2 – 'Mr Babbage is Coming To Dinner!' by Barry Guy. This piece calls for spontaneity and improvisation skills from the orchestra and has a beautifully written and painted score that serves as another form of art. Praise must be given to the percussionist, whose role in the piece is to symbolise the 'calculating' of a computer brain by running frantically from left to right improvising with percussive precision whilst giving the piece such life and physical energy!


One more set from the Langham Research Centre leads in to the grand finale – The world premier of the 'Concerto for Drum Machine and Orchestra' composed by Beni Giles, Laurence Osborn, Josephine Stephenson, Jo Thomas and Max De Warden. This is such a refreshing experience for me. The drum machine very rarely plays a set rhythm but instead is treated like a string instrument in itself. Sounds are twisted, sped up, slowed down and given an energy not commonly found in programmed/quantised drums. It almost bounces around the room, using the orchestral sound as a spring board and the lights enveloping us in the performance. Truly another musical world I want to re-visit many times over. 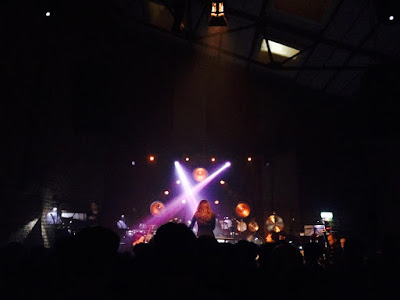 Praise to conductor Jessica Cottis for her skilled, musical and passionate performance on the podium and to the orchestra tackling these challenging and beautiful pieces. Thanks also to Non-Classical for hosting a musical event with all of the difference and chin scratching I love that is welcoming to anyone who may want to come, whether experienced in this genre of music or not. No one will feel alienated here.


A final thanks to the Village Underground venue for their hospitality. It would be amazing to see more support of this kind of music down here in Wales - there are plenty of Welsh musicians that would love to be a part of this kind of performance but very few avenues for it save for some small pockets of support. All in all, a wonderful night. Thanks Non-Classical!