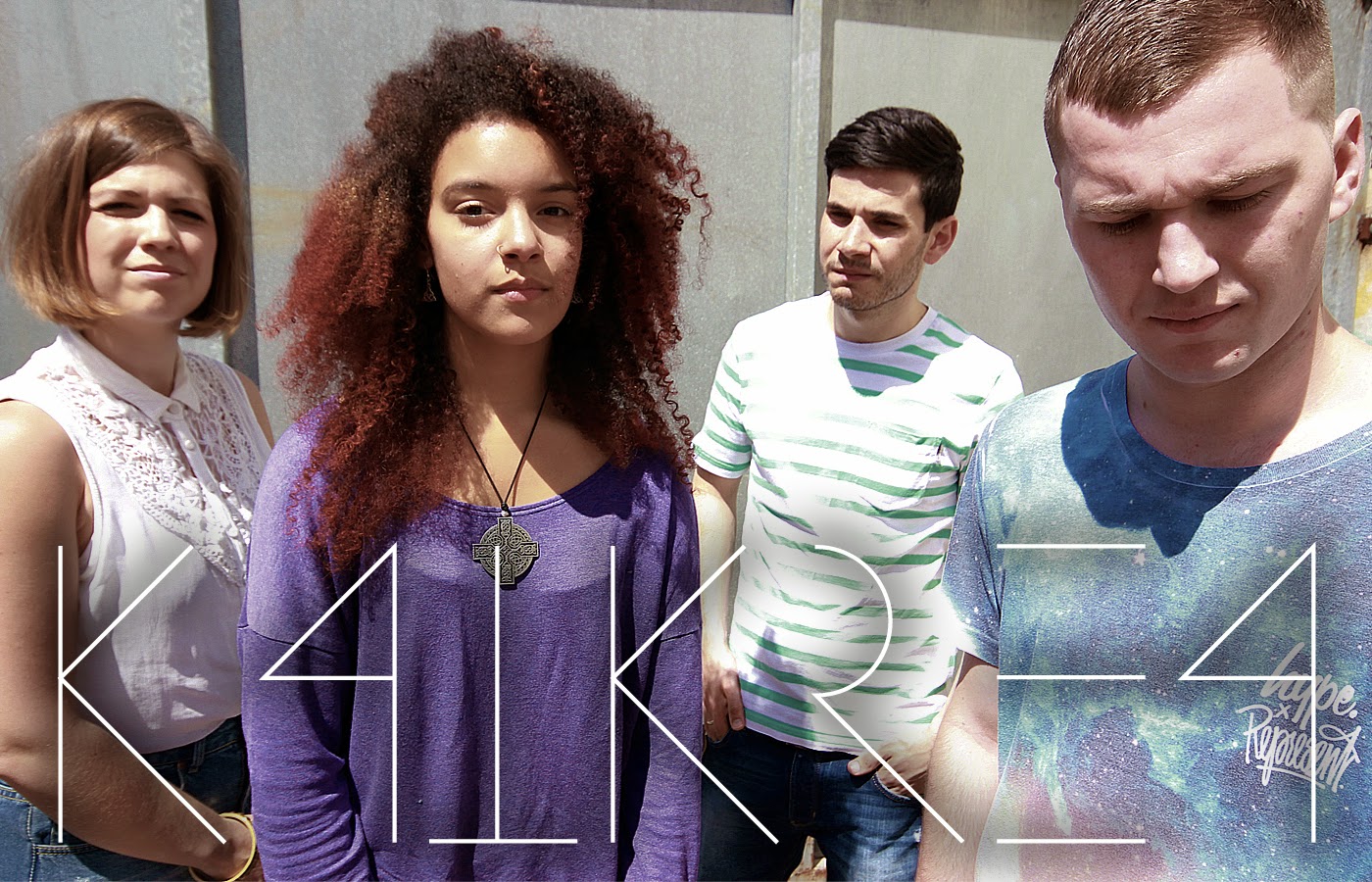 "..it’s important to give something back to the language and possibly do some stuff in music that has not been done with the language before."


This year is ending on a very positive note for the Welsh language and electronic music with artists like Carcharorion, Gwenno, Mr Phormula and Ifan Dafydd making and releasing inspiring work. Another exciting group who are taking full advantage of the beautiful language is Kaikrea, an electronic group who are blending contemporary electronic music production techniques and technology alongside some of the most beautiful folk music and soulful vocals. I caught up with Sam Shamoniks who is behind the beats to find out more.

EMW: Hello and welcome to EMW. How long have you been playing together as Kaikrea?

K: We’ve been making music together for about 2 years (I think). It all started from where me and Angharad Jenkins (fiddle player) were jamming some stuff combing Beats and Bass I had got together on Reason 5 with traditional Welsh melodys on the fiddle. We play together in a Welsh folk group called Calan. I’d heard about and listened to Kizzy Crawford, so I then tracked her down, got her involved and it’s just carried on expanding from there adding live Double Bass, Viola and Cello and making various styles of electronic music such as Garage, D&B, House, Dubstep, Ambient etc.

EMW: Your background is based in electronic music?

K: Not really, I’ve been playing guitar in bands of various genre’s since the age of 12 and still do which takes up a lot of my time touring and gigging around the UK, Europe and the U.S.  I got into electronic music when I started college at 18 so I’ve been at it for around 6-7 years so not that long really. I’ve been producing all kinds of stuff in loads of different genres as well as a lot of band recordings for personal and professional projects. I graduated from the Atrium (now renamed the University of South Wales) 2 years ago with a Music Technology degree. I’ve been producing my own electronic music on the side for a while under the name ‘Shamoniks’, having a couple releases of some DNB tunes on labels Mindstorm Records and DNBB Recordings and had a fair amount of Radio 1 support from a handful of tracks.

The rest of the band also come from a background of playing ‘real’ music and they are all amazing musicians in their own right, I feel very lucky to be working with them all.  Kizzy is a superb singer/songwriter and has been taking the country by storm playing her own material over the past couple years.  Angharad and Patrick are very experienced folk musicians and have massive knowledge in Welsh melodies. Patrick Rimes is also a talented classical music musician and conductor. Aeddan Williams is a great Jazz musician who also has classical music background.   The project is really a product of me trying to reverse engineer electronic music in a way to make it communicate the same ideas of a computer sequencer or a synthesiser and give it the ‘human’ feel and dynamic that is not possible to achieve from machines but still trying to sonically match the power of computer in the mix for the general electronic music listener.

That idea was then expanded upon by adding original and traditional melodies played on traditional instruments on top of the tracks that are influenced by popular modern electronic dance music styles and structures. Adding Kizzy's own writing and vocal style put another dimension into the tracks and brought everything together nicely.   Me, Angharad and Kizzy had all ready put ‘Ble Mae’r Golau’ together before I met Aeddan (Bass Player). It was when I was playing a gig on guitar with Kizzy for her EP Launch in Clwb Ifor Bach, I heard Aeddan sound checking his double bass using the bow through the subs when I thought ‘This would be amazing for the band’. It sounded so fat I had to get him in on the project, he also plays Cello too which came in really useful to for extra textures. Also adding that extra human feel and movement to bass.


EMW: Kizzy has a great solo act also. It’s rare to find such soulful vocals in fluent Welsh. It’s also really exciting to hear electronic music with the Welsh language. Was it a conscious decision to involve the Welsh language?

K: Yeah. We all were very keen on the idea making this kind of stuff in the medium of Welsh when we started out. We’re all fluent speakers so it was a very natural decision really. We also think it’s important to give something back to the language and possibly do some stuff in music that has not been done with the language before. Something for people to carry on into the future or something to bring outside attention in on the language. We’ve also played around with bi-lingual tracks (‘Ble Mae’r Golau’ was one of them) as well as some English tracks which we’re yet to released.

Take a listen to the track 'Ling Acco' that Kaikrea have very kindly given to us as an exclusive.

EMW: What’s it like for a young person wanting to make music living in Wales? is there a strong community for collaboration and sharing ideas?

K: It’s great. Wales is definitely small enough for you to be able to get a sense of musical community. I lived in North Wales all my life before moving down to Cardiff and up there you pretty much have to make your own scene and community if you want anything good to happen. Not a lot goes on except for the hard effort of a small handful of bands artists and promoters which is what I tried to do.  It took me a little while to find my feet in the scene in South Wales after moving down for Uni but after a while you start seeing the same faces around the gigging circuit so after a while you do feel a nice community of people who you can share ideas/information/interests for possible collaborations.

There’s also a wide range of great venues and promoters here that are into looking for good music so it’s creates a nice friendly vibe for everyone involved.  I personally feel just very lucky to have met the people around me, mostly by chance and feel as if a lot of my needs are here around me in the people I know that are willing to help, work and collaborate.  I know where and who to go if I need something for musical venture such as venues, which musicians to use, studio’s to hire, people to talk to about any worries I have in the business side of thing etc. Wales is full of great people, it’s just a matter of looking around you.

EMW: Are you working on much at the moment as Kaikrea?

K: There’s plenty of tracks that are currently being finished off. Everybody’s really busy with their own musical ventures to it’s been pretty difficult to get everybody together at the same time but I get together with Kizzy, Aeddan and Angharad whenever possible to work on stuff so there’s always something on the go.

EMW: You seem to be presenting this as live project. Do you plan on taking this project on the road?

K: Oh yes. Since the project begun we’ve always intended of doing it live. We’ve just been building up material so that we have enough stuff to be able to do a proper show. More of a musical journey than just a band playing a bunch of tracks as we’ll be approaching the sets with more of a seamless DJ mix approach. Very excited about hitting the rehearsal rooms of Cardiff in January to get all the material ready for gigging so keep an eye out for a launch show soon!

EMW: Have you heard much Welsh language electronic music?

K: Not a lot of Welsh language stuff that I’ve really enjoyed. I’m well aware that there’s a large amount of very talented electronic music producers either living or from Wales such as Ifan Dafydd, Switch Fusion, Rezaloot, Whattsun, Mr Phormula (to name just a few, sorry if I’ve forgotten any). I’m glad we can contribute something a little bit different to Welsh electronic music as well as do something different with some traditional Welsh melodies to carry them on too. Letting people hear the melodies and language in a way they may never have heard before.

K: I don’t really get into the Christmas vibe when it comes to listening to Christmas music but I guess if it the holidays you’ll have time your hands to listen to plenty of music.  I’d recommend watching all of BINKBEATS videos on YouTube as they are all seriously amazing of haven’t already seen them. Even if you have, just watch them again. He’s probably one of my favourite producers/musicians. I love the way he can recreate electronic tracks using all kinds of crazy s**t and often making them sounding better than the originals. What a guy!