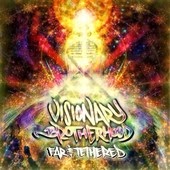 Legends of conscious rap Visionary Brotherhood have released a new album. 'Far & Tethered' is available to buy on iTunes - https://itunes.apple.com/us/album/far-tethered/id881195318