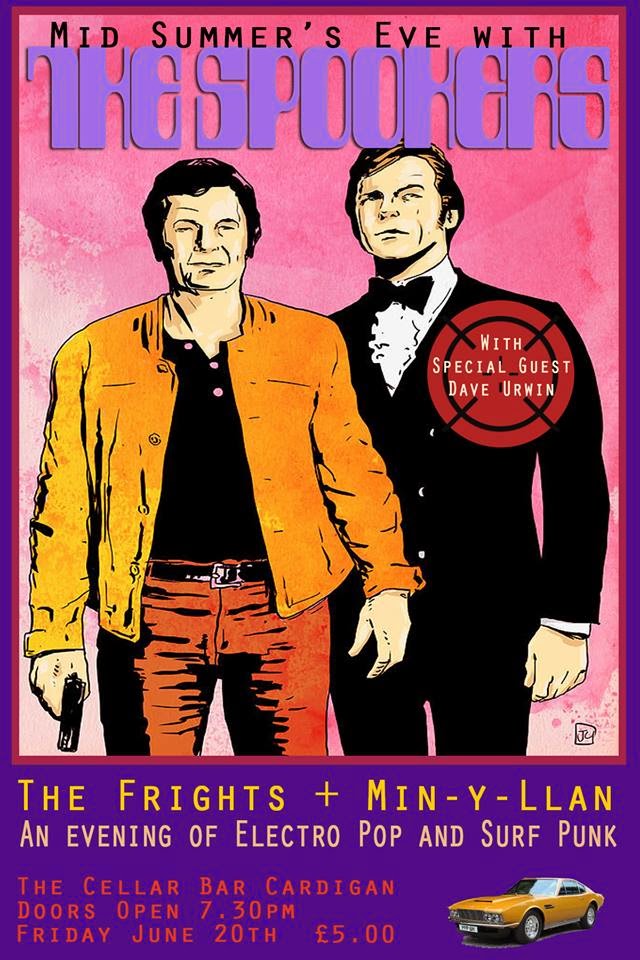 Mid Summer's Eve with THE SPOOKERS

With Min-Y-Llan and The Frights

They played gigs in Cardigan at the tail-end of 2013 including a
Winter Solstice support slot with local psychedelic legends Sendelica
at the Castle Cafe Cellar Bar and a set at Cardigan’s Quay Street
Gallery.

The Spookers are based around the nucleus of Paul Williams and
Gavin Lloyd Wilson, with other musicians taking part on an ad hoc
basis.

Paul played bass in Ceredigion’s first ever punk band, Archie and the
Uks and in Brighton’s legendary Airtight Garage and recently played
and wrote with Harry Roger’s Scene Red; in The Spookers he is
responsible for the programming as well as playing guitar and bass.
Gavin plays guitar, bass, and Bass VI, whilst outside of The Spookers
he records as Spurious Transients and occasionally stands in on bass
for Sendelica.

Both Paul and Gavin have an eclectic taste in music, each having a
very large CD and vinyl collection. Their musical influences coalesce
in The Spookers, where the tracks are variously informed by a diverse
range of styles including electronica, krautrock, psychedelia, punk,
rap, dance, ambient, dub reggae, and the occasional TV theme.

Although most of their material is instrumental The Spookers like to
incorporate the spoken word into their music and have recently been
working with local poet Dave Urwin, and have taken three poems read
by Dave and set them to music for a forthcoming EP release.
The Spookers together with Dave Urwin will be debuting their new
material at the Castle Cafe Cellar Bar in Cardigan, on Friday 20th
June 2014.

To add to The Spookers’ eclectic set there will be two support slots
offering dreamy downtempo electronica from Min-Y-Llan (a.k.a.
Martin Boulton), and surf punk from The Frights.