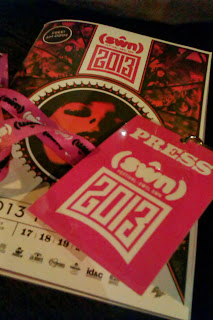 We arrived at the Fashion Quarter to an array of wonderful items, from vintage clothes to a Super 8 camera and the friendly faces of the Swn staff who supplied us with everything we needed to get on with the 4 days of music ahead.

Upstairs they were setting up two screen printers for official Swn t-shirts. It's these little details that make Swn such a forward thinking affair. Between Swn radio, screen printed t-shirts and a free app available for scheduling the bands and setting reminders you can tell the organisers really care about the finer details. One thing I would say is it would be great if the app worked on Android devices for the poor souls like myself who don't have an iPhone or iPad but there were free programs and schedules readily available so this really was a minor detail.

Womanby Street was already buzzing with activity with people hanging out on the street and the venues readying themselves for the crowds that would soon be upon them. Having talked with Jon Rostron (WMF) briefly it was great to hear that ticket sales were doing well and that they were even considering having to stop sales for Friday! This gave me confidence that the live acts would be getting the crowds they rightly deserve.

We sat down at the Queens Volts, a great pub right opposite the majestic Millennium Stadium with pool tables and great offers on food. 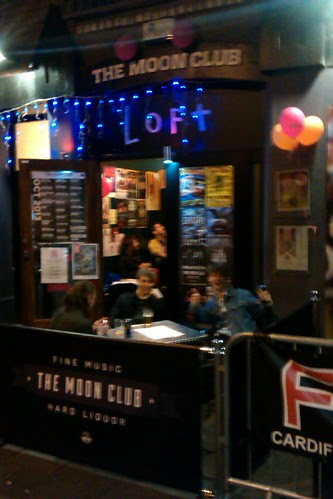 Our first stop would be the Cardiff Noise and Post Rock duo His Naked Torso at the Moon Club. There second time performing at Swn, both were happy to be opening up proceedings for the venue and were looking forward to the rest of the weekend. It's always a good sign when the bands playing are also sticking around for the whole show!

Consisting of a guitarist with a selection of pedals and a screaming voice and the drummer who also had by his side a beautiful limited edition Korg synth with inverted keys similar to the ones on Sun Ra's synth in his final show before leaving planet earth in the film Space Is The Place. Their sound was abrasive at first but also gave way to more melodic rock aesthetics and ambience. Full props for the drummer being able to maintain time whilst playing the synth parts. Not an easy task but his drum sticks never hit the floor! I managed to purchase an old demo CD for the wonderful price of 50p. 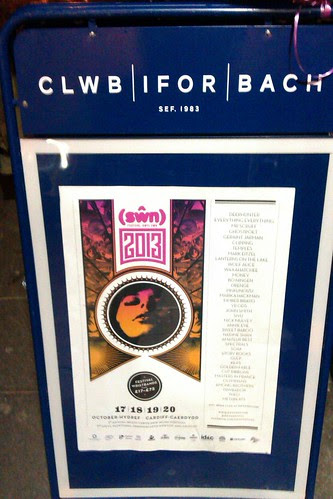 Next we headed over to Clwb to listen to the Wichita label showcase and Cheatas who had the full attention of a large audience in the downstairs room before heading back to the Moon for some more experimental explorations in the form of multi ethnic musical instrument looper Tuulum Shimmering. Layering all sorts of flutes, string instruments and percussion he played one continuos track for the entirety of his set building up into a layer of drones that started giving way to feedback loops before crashing back to silence.

Back  at Clwb, bass player Guto Pryce(SFA), vocalist Lindsey Leven, guitarist Did Goundrey and ex-Race Horses drummer Gwion Llewelyn collectively known as Gulp were turning on their amps and sound machines and heading off in to the realm of psychedelic pop music with the mesmerising voice of Lyndsey guiding us through the dreamy haze.


Leaving the haze we headed over to the Angel Hotel, dripping in history and having served the Welsh rugby team for decades it was a wonderful place to find Trwbador performing material off of their debut album that had been, just the day before, shortlisted for the Welsh Music Prize. Avan Rijs opened up the set by congratulating Georgia Ruth for winning the WMP with her beautiful debut album 'Week Of Pines'. The venue was carpeted and so we all took the opportunity to sit down and let Trwbador sing to us their synth pop lullabies allowing our legs to get some rest for a short time.

Eventually people did start standing again and by the time Ghostpoet and his band took to the stage the dreamy atmosphere that Trwbador had provided subsided to a much darker edge, the lights were turned off on request and Ghostpoet began his beautiful mixture of spoken word and singing. His presence on stage is massive and very emotive. By the end of their upbeat and yet melancholic set the crowd were deep in to the mind of the artist.

One final stop for Thursday was to head over to SOLUS for Mr Scruff. A fair walk from the rest of the venues but well worth it for the eclectic set that greeted us ranging from breakbeats, Hip Hop and samba rhythms to soul, blues, jazz and all things in-between. The crowd loved it and where in the words of Mr Scruff himself… "Lovely!"
Cardiff Cheatas Festival Georgia Ruth Ghostpoet Gulp His Naked Torso Mr Scruff Review SWN Trwbador Tuluum Shimmering wales