Swn Festival returns to Cardiff as the premier Welsh music festival. Covering several venues across the capital there will be live bands, DJ sets, film, fashion and art exhibitions to cater for all tastes.

Starting on Thursday and running through to Sunday, Swn promises to bring an array of exciting events to an open minded and expecting audience.

Other highlights from Thursday will be Welsh Music Awards nominees and folk electronica duo Trwbador, who have had a great year performing this summer including an appearance on the Radio 1 stage at Glastonbury!  Catch them at the Angel Hotel, Dragon Suite , 9:15pm before Ghostpoet.

You should also check out Gulp performing at Clwb starting at 8:45. Dripping with psychedelic overtones and a very true, down to earth pop aesthetic. Tip.

As well as these highlights there will be loads more happening around the selected venues in Cardiff, these include Clwb Ifor Bach, Dempseys, Globe, Gwdihw, O'Neills and the Moon Club.

Welsh Dub and Electronica act Llwyber Llaethog will be performing on Friday at the Angel Hotel. Clwb will be paying host to several live bands with the Alex Dingley Band performing at 9:15pm followed by the Xerox club night upstairs.

The Moon Club will be holding down the singer songwriters with Tawiah opening up at 8pm followed by an exciting mix of acts right through.

Saturday sees the addition of Chapter Arts supplying the film and art exhibitions, an outdoor stage, Fuel club, Jacobs Market and St John's Church. So many amazing venues all within easy reach of each other.

Watch out for Clipping at Clwb, Oliver Wilde at Chapter and Metabeats at O'Neills  on Saturday. There will be loads of great acts on and this will definitely be a festival that requires some forward planning and strategic movements throughout the whole four days.

Look out for Plyci finishing off at Jacobs Market with a live set also!

Sunday sees the festival roll to a close with a closing party at Clwb but I get the feeling that Swn do not want to go out with a whimper and for me the best place to be will be the Moon Club with The Heatwave crew followed by Dubkasm from Bristol.

Other Sunday highlights will be Cowbois Rhos Bottwnog at Chapter and Up Down Go Machine at Gwdihw. Both bands I've been very lucky to hear perform in the past.

Allow Swn radio be the soundtrack to your weekend.

There is no way that I can put in to words how awesome this weekend of music is going to be so my best advice would be to study the timetable with friends and a pen (Timetable) and get on down to the most exciting music festival Cardiff has to offer!

The best thing about this festival for me is that there are so many acts that I have never heard of and so will be making it a mission to hear as much as possible over the four days.

See you at the front!

WMF will be hosting several seminars from Weds onwards at St Davids Hall looking at the live music scene, promotion, record labels and insight from some of the leading heads in Welsh Music. It's free and you don't have to be going to the rest of the festival to get involved. Here's the flyer - 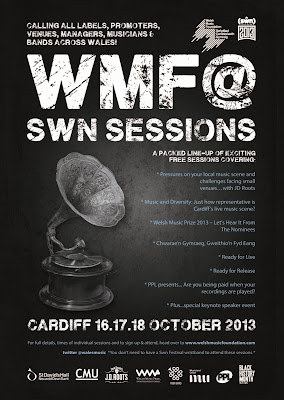