What more could you possibly want from a Bank Holiday weekend in the capital? 150 acts covering 8 venues all for £15!!! Hub festival looks set to be a great celebration of music in Wales.

EMW: How long has Hub being running?


S: This is HUB Festival Cardiff's first year running and we've had a fantastic response from the city already. We're hoping to become a staple part of Cardiff's festival season.

EMW: How would you best describe Hub festival?


S: HUB Festival Cardiff is an opportunity to showcase some of the incredible music, art and performance that this city is overflowing with at the moment! In our opinion, Cardiff houses some of the best music in the world at the moment, and the scene has never been so vibrant. We've tried our best to put as much of it as we can all on one street, for a nice and affordable price.

EMW: What music are you listening to in the Hub office at the moment?

S: We're currently sat in the office getting familiar with some of the acts that are performing this weekend! Trippy Wicked & The Cosmic Children of the Knight are something a bit special, if you prefer your music on the heavier end of the scale. Joe Driscoll and Sekou Kouyate are an interesting one too. They're one definitely not to miss. We've also been rocking out to Howl, and jamming to Tree House Fire. It's a hard old life running a festival!

A load of info on the festival is up here: hubcardiff.com

Weekend wristbands are £15 and there are a ton of great acts across the weekend.

James Reichelt, Cardiff producer Alone and promoter of What The Math? gives us a low down on one of the many events that are happening this weekend. 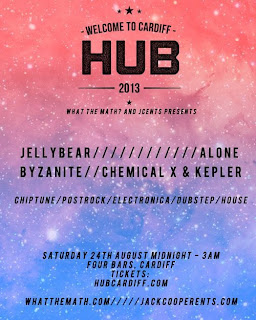 On Saturday Midnight - 3am What the Math? and JC Ents are curating at Four Bars above Dempsey's, bringing retro consoles, beats, glitches and loops from local artists and DJ's

Alone live has played with Hexstatic @ Swn Festival 2012, Laurence Made Me Cry, Citizens! and Mr Fogg. Tracks have been featured on AmazingRadio and BBC Radio1 Introducing with Jen and Ally.

Going solo from an Electro/Glitch duo in March 2009, Byzanite since then soared to a unique sound of chiptune. With other tastes in music, He indulges in non-purism chiptune or creations which have no 8-bit elements in at all!

In 2013 Byzanite unleashed Citadel of Chaos, his latest album mixing dubstep, chiptune, house, hard beats and a passion for partying, pizza and cigarettes. Both as a live performer and DJ, Byzanite is an artist not to miss.

This mysterious duo (who would not provide a bio) close our night with a set of deep house, reverse bass and filthy beats.

What the Math? (whatthemath.com) promotes retro tinged musical events, inspired by the healthy chip/retro scenes of New York, Liverpool and Manchester. In April 2013 WTM? brought US Nerdcore MC MegaRan for his first ever show in Cardiff and hosted the Retro Game Party in 10 Feet Tall. In November, alongside JC Ents, WTM? will present Gameaplooza, a full day festival of retro videogames, art, video and of course, music from the finest chip/retro inspired musicians in Wales.

JC Ents (jackcooperents.com/) presents a wide variety of events across South Wales, including gigs, stand up night, variety shows, speed quizzes and more. JC co-promted the Retro Game Party with WTM? and this partnership continues with Gameaplooza in November 2013.

Many thanks to both Sam and James for the info. If you are in the area then do not miss this festival!


Here's the full festival line up - 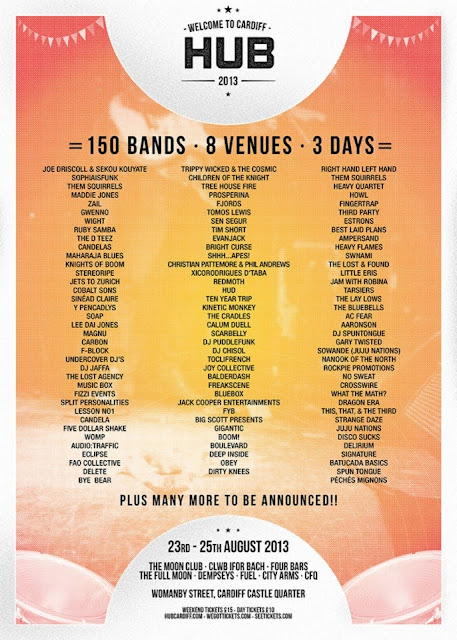