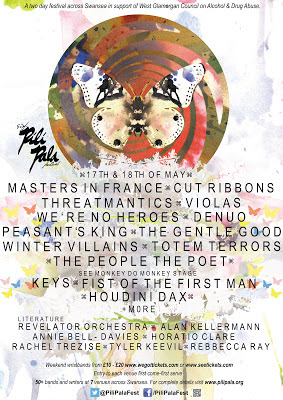 There are now only a few days to go before the inaugural Gwyl Pili Pala festival hits the streets of Swansea, with over 50 welsh artists performing, as well as a diverse literary roster, music and literary workshops and quizzes, sessions and much loveliness packed into 6 different venues across the city centre and Uplands areas of the city. There are loads of exciting musicians and writers performing over the weekend, with over 50 bands, including Masters in France, Cut Ribbons, Fjords, Laurence Made Me Cry, Denuo, Greta Isaac and Winter Villains, to name just a few.

There are also literary workshops at Dylan Thomas’ birthplace and a few festival exclusives - in particular The Revelator Orchestra on Friday night is one to look out for, being the first UK performance of Peter Murphy's literary reading-cum-musical act, who've been described as "combining the weirdness of Poe with the coolness of the Beats over a soundtrack that might’ve been created by the Velvet Underground".

The festival is hoping to inspire Swansea's music scene in the same way the hugely successful Swn festival has done for Cardiff. Festival organiser Angela Muir says "the strength of the line up proves Swansea can do this kind of event - bands like The Adelines and Cut Ribbons on the bill are from Swansea and West Wales,  and we hope that other artists, teenagers just playing around on the guitar from around here will take notice and be inspired by the fact the festival is on their doorstep."

Tickets are just £15 for a two day pass, giving you access to all 6 venues, including St James' Church, cafes, traditional gig venues and even Dylan Thomas' birthplace. All ticket sales go towards funding the work of WGCADA, a South Wales drink & drug abuse charity which is based just minutes away from most the venues.