An interview with producer Benjamin Damage

on March 01, 2011
As far as forward thinking beats go one producer well worth keeping an eye on at the moment has to be Benjamin Damage one half of the previous Venom & Damage who saw releases on Swansea label 10 000 yen. His 4x4 aesthetics coincide smoothly with the rougher deep bass laden sounds. Here Benjamin talks a little about his work methods, getting track on Modeselektor's label and plans for his new label Solva.
HJ: Welcome to EMW! Please introduce yourself to those who may not know your work.

BD: I'm Benjamin Damage, I have worked with DJ Venom and Doc Daneeka and have records out on Ten Thousand Yen, 50 Weapons and Solva.

HJ: Who do you sight as a musical influence?

BD: Future Sound of London were a big influence growing up in the way they created atmosphere and warped sounds in and out of recognition. Production standards in electronic peaked in the late 90s when there were so many big studios and proper engineers around.

HJ: You've worked as a production duo alongside Daniel Venom with releases on Swansea label 10 000 yen but recently have been releasing solo material. How do you find working on your own as apposed to working with another artist?

BD: Working with Venom was a challenge but when it worked it was really good, we'd have these ridiculous ideas and make them work somehow. Everything from Paradise Slugz, the Maximum Carnage tapes to the Birthday Sex remix was like that - total chaos, throwing ideas around and banging them into shape.
Jeremih - Birthday Sex (Venom and Damage remix) by BenjaminDamage


Everything from Paradise Slugz, the Maximum Carnage tapes to the Birthday Sex remix was like that - total chaos, throwing ideas around and banging them into shape.

Solo material gives you have a lot more time to experiment and push things, and its more satisfying when you develop an idea and follow it through to completion. Finishing tracks is the hardest thing to do.

HJ: Your first solo release was on Modeselektor's label '50 Weapons'. How did this come about?

BD: It was very simple actually! Modeselektor wrote to me saying they loved the track and wanted to release it….

HJ: And now you are releasing your next EP on your own label 'Solva'. Have you set this up for your own work or will other producers be featured?

BD: It starts with the Antidote EP and I will continue to release records which I feel push things forward. I'm on the lookout for new material. Its got to be the right sounds, but If I find the right artist to push I'll definitely do it. 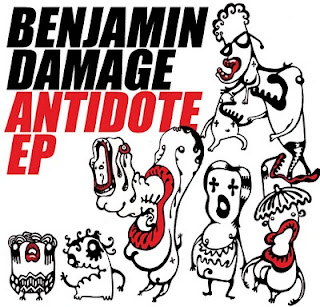 
It starts with the Antidote EP and I will continue to release records which I feel push things forward.

HJ: What sounds are you looking for to feature on 'Solva'?

BD: I don't like to get too restrictive on genres. I prefer music which is inspired by different genres and movements that you are really into. If you start copying the sound of 'now' then by the time you have got it right, its over.

HJ: You're originally from Swansea. Would you say there is a strong music community in Wales?

BD: There is a lot of love for music in Wales. Its a small place so you generally get to know everyone if you're into it, because they all hang out in the same places.

HJ: How does it compare to places like London?

BD: London is about 3 times the population of Wales, in a much smaller area, so there is far greater diversity. In Wales you will get a handful of clubs in each city which will reach out and play new things. In London its everywhere.

There isn't anything to compare to places like Plastic People, Fabric and the warehouse scene. In London you can go and see a great artist playing out every week and you learn a lot from that.

HJ: Describe your studio kit briefly for the tech heads.

BD: Antidote was made mainly with Renoise. Its a tracker program which works in a very different way to cubase or logic. It counts in hexadecimal rather than decimal, meaning you count in 16s instead of 10s. It makes a lot more sense for 4/4 music.

HJ: What advice would you give to anybody starting up in music production?

BD: Good music is always good but fashions come and go, so always make music you really believe in.

HJ: Future plans for you and your label?

BD: I'm doing a collaboration with Doc Daneeka. The first single is coming out on Modeselektor's 50 Weapons in March and there will be more to come. As for the label, I will be keeping my ear to the ground...
Benjamin Damage & Doc Daneeka "Creeper/Infamous" (50WEAPONS009) Out March 11 by Modeselektor


I'm doing a collaboration with Doc Daneeka. The first single is coming out on Modeselektor's 50 Weapons in March and there will be more to come.

HJ: How do people get in touch about releases, bookings and remixes?

BD: Find me on twitter or send an email to benjamindamage@gmail.com

BD: Thanks to Roxy for truly unconditional support.

BD: Coffee in the morning, tea all day, beer in the evening, vodka at night.

A huge thanks goes out to Benjamin Damage for taking the time out for this one. Keep a close eye on his sounds in 2011 else you might miss something massive!