A quick background of the event from the rwan.cymru website:

“NAWR ANOIS is a series of 7 concerts, running from February to July 2018. The series showcases the diverse music of contemporary Irish, Welsh and international artists. The series aims to develop deeper connections between Irish and Welsh composers, sound artists and musicians.”

I attended the 6th event in the above series on Thursday the 6th of July, which featured Rachel Ní Chuinn on clarinet and Ableton Live and Mia Zabelka on violin with her myriad of pedals and also Ableton Live. 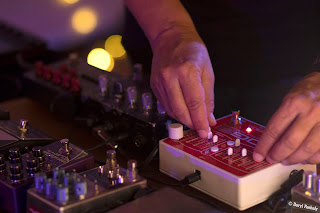 Like the rest in the series, it was held in the historic BBC Hall in Alexandra Road, Swansea, which is a fantastic space which you feel could tell you some interesting stories about past performances. The place hadn’t been open to the public for decades until very recently so it feels a privilege to be in such a secret location. You have to get someone to let you in as it has BBC studios downstairs, but don’t let that put you off as there was a friendly welcome to be had. 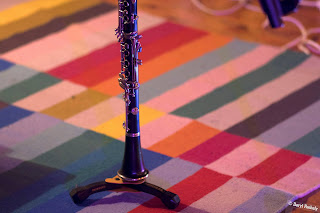 It was a small but appreciative crowd on a warm night of July and once the lights were dimmed, Rachel transported us into her world with simple, considered notes on her clarinet. It was worth being in the front row, as you were immediately drawn into a calm space, then you became progressively entwined with the layers of the dreamy soundscape which came out of Ableton Live. Three words to describe her performance - fragile, hypnotic and captivating.

Then after a short break, Mia took to the stage kicking off with her acoustic violin with contact pickup. It was obvious from the first few strokes of her bow that she knew the instrument inside out, as well as how to get the best out of it. Like Rachel, this expertise also dragged you into her world, but this time with a great deal of gusto.

Then came the second piece, which saw her take an electric violin to places I certainly didn’t expect, using what looked like chopsticks, her fingers and best of all, two bows at the same time. There were hints of heavy metal when she switched on her distortion pedal. She was the boss of the instrument from start to finish. Only one word is required to describe her performance - astounding.

Emotionally drained and dripping with sweat, Mia’s set came to a close and the audience were totally satisfied with what they had witnessed. Seeing her at the top of her game was a truly memorable experience for me.

The last in the present series of gigs is on the 24th of July which I certainly hope to attend and hope that more people get to experience experimental music. You won’t be disappointed.