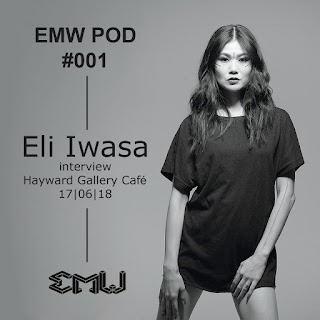 When I was contacted to interview Eli Iwasa I knew nothing of this prolific and extremely hardworking woman of electronic music.

Having arranged to meet before her DJ set at Egg Club for the European Warung tour. Warung is one of the most established club nights in Brazil. I was both nervous and excited to find out more about the roots of this entrepreneur of electronic music.

I made my way to the club to meet at 1am but unfortunately due to lack of time we were unable to make the interview possible on that night. So I caught the tube home and went to sleep.

Eli Iwasa DJ’d alongside her companions until 8am!!!

We had re-arranged to meet the next day after my work and fortunately Eli had decided to go to visit the Hayward Gallery on Southbank for the Lee Bul exhibition that is currently showing. The cafe upstairs turned out be a perfect setting and very apt for this interview with such an inspirational person.

I hope that you take the time to listen to this very insightful interview and share your thoughts on the subjects covered.
Stream: