For those familiar with his productions you will be glad to hear that his trademark hard hitting drums and clever sample manipulation are still very much apparent throughout the album.

The MCs and Vocalists featured on 'Caviar Crackle' all manage to bring their own flavors to the pot, the bragadocious Action Bronson starts proceedings with the stand out track 'Hookers', a heavy hitter and definitely a collaboration that has been much talked about in the Hip Hop world.

Dubbledge steals it for me with the track EyeSeeYou. Hip Hop music that has a message, "but when you see me, don't bother place me, in any category" a message that is needed more now than ever before!


'Caviar Crackle' has it all. Hard hitting club bangers, Nu Soul classics and conscious lyrics. Getting released on 25th June through Associated Minds, any discerning Hip Hop head would be a fool not to grab a copy! 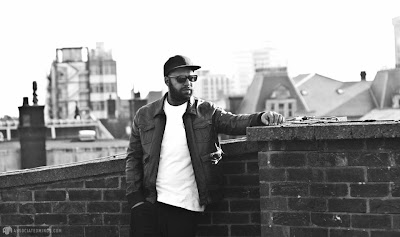 "So it made sense to work with mostly American artists so it can capture people and they get a chance to hear some UK music teamed with American rappers."~Metabeats on working with US artists.


EMW: Hey welcome back to the blog. How's preparations for the album release going?

M: What's up my man? Everything is shaping up nicely, we're all excited like kids waiting for Christmas over here ha.  Well I am anyway.

EMW: Are you still based in Cardiff?

M: Yup (well Barry which is just outside) Cardiff is the spot ATM. A lot of people making great music, all styles and flavours. And the good thing about it is most of us are friends. It's a great thing

EMW: How long have you been working on 'Caviar Crackle'?

M: I would say over the last 3 years, but not until last year did we go in to 6th gear with it. As I have a lot of projects I am involved in, I was snowed under with other stuff like the Darkhouse Fam projects and production for other artists/projects. But last year was the real creating period and hooking up with artists for the record. I feel blessed to have so many great people on there.

EMW: The album features a host of strong mcs and vocalists from both the UK and US. Did you already have specific artists in mind before you started making the LP?

M: Not really it was kind of stumbling across them from hearing friends shout about them or hearing a mix tape/video. I always like to look out for new artists who I think will make a big mark in the business and a few already have over the last 12 months like Action and Quelle and then people like Oddisee and Von Pea have been holding it down for quite some time. Then I think the newer guys like Chuwee and Zeroh will be making waves over the next year. It's exciting too see so much more. "Underground" shit happening on a high level again. I think it went a bit sour for a while!

EMW: As a beatmaker does it matter where you are in this day and age to make connections with other artists and vocalists and to collaborate?

M: It can help being in a big city but the power of Internet can do so much for you. I wouldn't have had a lot of the opportunities on this record if it wasn't for that tool. As long as you have a good product and be straight up with who you wanna work with, then you're usually on to something.

EMW: How did the US connection come about?

M: The plan was to kind of cover it with US artists. Main reason is we feel we should be heard over there a lot more than we are, and sometimes that's because in the US they don't really check for UK rappers/beats. So it made sense to work with mostly American artists so it can capture people and they get a chance to hear some UK music teamed with American rappers. It is also a good way to create a relationship with more artists from stateside and opens doors for us all.

EMW: There's a lot of focus on producers at the moment especially within Hip Hop. Would you say it's getting more difficult for upcoming producers to break through and get noticed and also to get MCs to notice them?

M: I don't think it is anymore. Going back to what I said earlier. As long as the material is on point and you pitch it right and keep a tight ship, things can happen pretty easily. Of course there are a lot more people making music these days, but not everyone wants to put the work in around it, so work harder folks ha.

EMW: Who else from the UK would you recommend we check out in terms of beat making right now?

EMW: And what about MCs and vocalists that you are feeling at the moment?

M: I'm really liking a dude by the name of *KA at the moment. He's affiliated with Roc Marci. It's full on gutter rap, but I love that cold shit ha. Also Quelle is killing right now, so glad he made it on to the record. He is a bad ass beat maker too.

SLSBS ft Quelle Chris is available as a Free Download up to the release date!

EMW: How can one get hold of your upcoming album?

M: The release date is officially the 25th of June worldwide on iTunes etc but you can pre-order right now through associatedminds.com and my bandcamp page and get some tunes upfront.

EMW: So your album is done! What's next ?

M: The next has already started ha. I don't stop!! I'm currently working on the next Darkhouse project with Don Leisure. I don't want to reveal too much but this next record is HARD! We've aimed for the club specifically on this one. We tested some of the new material at the Rustie x Gaslamp Killer show a few weeks back at village underground and it was rocking! Excited about that coming too.

Many thanks to Metabeats and Danny Mayor at Associated Minds for hooking me up with this feature.