Dripping in Soul, Metabeats track 'Passport' featuring singer Vanity Jay is a Neo Soul classic with Summertime hit written all over it. EMW catch up with Huw Caddy, the man behind the retro video that accompanies the song.

MW:  So how did the project come about?
H: I've been working with the Associated Minds label for quite a bit. We've collaborated on quite a few video projects over the past few years and so they’re my bro’s now. One day I was at the studio, Metabeats was there tweaking this amazing sounding 80’s tune, which was going on his forthcoming 2nd album ‘Caviar Crackle’ so we just got talking over an idea for a video. As the last one was the amazing ‘Eyeseeyou’ which dealt with some strong issues.

So he wanted to mix it up and follow through the theme of the whole retro vibe, which had the fun, funkyness to it and that just gave me some amazing scope to play with some ideas.
We had a few sessions where we just sat down and all watched a bunch of classic videos from back then to act as inspiration and get a loose idea of what we were both happy with, then I took it on from there. We wanted to use a VHS Camera from the get go to get the authentic look, so it was a definite challenge to work with footage & a camera that was over 30 years old which took actual VHS tapes! I’m super pleased with the outcome and a few people asked me where I got the stock footage from, so my job was done. 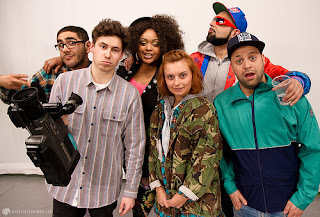 "Film and make as much as you can, meet people with similar interests and don't work for free!"


EMW: What other projects are you working on?
H: The projects I'm currently working one are:
Another music video for Associated Minds produced by PLO with raps from Sonny Jim & Ralph Rip Sh!t entitled 'Bongproof' which is gonna have some visual niceness to it and not being your average hip hop video... hopefully should be dropping in the next few weeks, so keep an eye out for that one.
A few mini visual teasers aka Blipverts for BadTaste records out of Sheffield/LDN. check them out, as their putting out some amazing sounds.
A pilot vid for AM which involves a beat making collaboration session mixed with some gourmet cooking from yours truly called  'Taco Tuesday'
A music video for a track off Sonny Jim's forthcoming album and few other music video’s & bits in the early stages of planning, so looking forward to cracking on with those.
EMW:  Any advice for budding film makers?
Film and make as much as you can, meet people with similar interests and don't work for free!