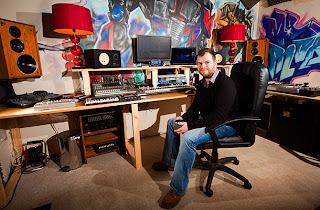 Mr Phormula is a professional beatboxer, producer, MC and all round noise maker from North Wales! He's collaborated with some of the biggest names in the industry, and is exploding on to the UK hip Hop scene! I got a chance to hook up with him to talk about his work, inspirations and future plans!

J - So.. you're a beat boxer, producer, and an impressive lyricist.. Which medium is where your heart lies? Or are they equally important?

Mr.P - To be honest they are equally important, however, I feel that my strengths lie in beatboxing and music production. As a youth I was always shy about performing in front of people, so I got into making music at a young age, hiding behind the decks etc. I always used to be beatboxer of course, but not in front of audiences!

J - Who or what inspired you to follow this path? Who is your biggest musical inspiration?

Mr.P - My parents and Rahzel. My mother used to be a singer / multi instrumentalist so I grew up surrounded by music. My father also used to do PA systems, all the right ingredients to become a musician! At the age of 9 I had my first beatbox encounter with Rahzel and that was it....

J - You come from a reasonably small town in North Wales, what was the music scene like there?

Mr.P - Non existent apart from myself and a small circle of friends that used to regularly meet up and DJ, make music etc.

J - How hard was it for you to break in to the industry?

Mr.P - Very, however, I wouldn't say that I've even broken through. I think as an artist in today's industry, you have to accept that "Making it" can mean many things. For me, that "thing" is being able to live off what I love doing, which is music. Therefore, I'm not really concerned with the rest of the industry. Speaking from previous experiences, the bigger "industry" is a vicious circle to be in, I'm happy to roam in my circle and earn income off my passion. Nuff said ;)

J - What were the steps you took? Where did you start?

Mr.P - Cliche answer but, practise! Non stop, everyday! If your passionate about something you'll practise, without it feeling like a chore, if it does feel like a chore, then maybe your not destined to become what you think you'd like to become. The more you put in, the more you get out.

J - What advice would you give to aspiring hip hop artists trying to make it on the UK scene?

Mr.P - Practise as hard as you can, become as good as you can! Continuously watch videos of people that do what you do, keep on top of your game and don't copy anyone! Research artists and aspire to be different! That's the key, don't copy other artists, that leads to saturation! There's already tons of saturation out there, unless your different you'll end up as one of the million artists doing exactly the same thing! The other key in today's industry is drive.. If you don't chase up people, hassle for gigs, push promo CD`s, get on twitter etc, you have no chance! As previously mentioned the bigger "industry" is a vicious one - every man for himself, (or female!).

"I'm not particularly fussed about the fame aspect of the industry, it doesn't feel real! Real to me is communicating with someone and giving them the means to realise that they can also do/be something!"


J - I admire the fact you find time to introduce hip-hop workshops to young musicians throughout Wales and UK. 808 is a truly inspiring programme, and will do nothing but help supply the hip hop scene with fresh, young talents for the years to come! How is 808 going? You keeping busy?

Mr.P - Firstly, thanks for the compliments! The majority of my income is produced via workshops and performances. Personally, I don't find anything better than inspiring and influencing the younger generation, that's where it's at for me. I'm not particularly fussed about the fame aspect of the industry, it doesn't feel real! Real to me is communicating with someone and giving them the means to realise that they can also do/be something! I love my job, I'm continuously working with people of all ages, its a great way of life! Performing is also a passion of mine don't get me wrong, I love entertaining, but its the rest of the industry baggage that comes with it that can be a pain!

J - It must be amazing to see them progress as musicians!

J - Are there any Welsh/British musicians breaking in to the industry that have got you particularly exited at the moment?

Mr.P - I love Hip Hop, Glitch, Soul etc! I can name tons of artists but whether or not they'll breakthrough I don't know! There's a lot of artists in South Wales that are amazing, such as, Skamma, Mudmowth, Jo Blow and tons more! Up North then you have Dybl L, Hoax, etc. Then outside of Wales, I like artists such as, Verb T, Dr Syntax, Leafdog ( Leafdog will be at our next night on 16th November), Sonny Jim, High Focus Records. American artists such as, Roc Marciano, Action Bronson, Mr Lif, Mr Hopsin etc, just love music for what it is!!

J - How do you think the UK hip hop scene has grown since you've been involved?

Mr.P - Incredibly! The UK scene is ridiculous at the moment, such a fresh sound and some of the current artists are defo on another level! Seen it grow since the late nineties, definitely!

J - How excited were you when you were invited to take part in the 'UK Rap Anthem' and BBC 1Xtras Rap Britannia documentary?

Mr.P - Very, couldn't quite believe that they just emailed out of the blue?! Great experience too, met some great artists! Good to meet people that are representing other minority areas such as myself, defo had a lot to talk about!

J - Well done for representing Wales and the Welsh language in that track! :) How important is rapping in Welsh to you?

Mr.P - I feel rapping in Welsh definitely gives me individuality, and that's very advantageous in the UK rap industry! I'm able to speak two languages fluently so I'd be a fool to not use both languages in my music to help me stand out from the crowd. Speaking and rapping Welsh has opened a few extra doors for me, its not the only reason mind but it has definitely helped!

J - Do you hold any workshops in Welsh? And do you encourage young rappers to use our beautiful language?

Mr.P - Yes all the time. The majority of my workshops consist of Welsh speaking individuals, which is great as it promotes the Welsh language and makes it a bit more "cool"! Its nice to know I'm doing my bit for the Welsh language!

J - So.. I hear you'll be performing in a little event called the MOBO's this year!! Massive! How hyped are you?

I also have a gig the night before supporting Danny Dyer, Chris Beale and Boy Better Know in Chester, then the Mobo`s the night after, so its going to be a very interesting weekend! Ha! Can't wait!

J - And you're hosting a massive Hip Hop night at The Parrot, Carmarthen on November the 16th as well! Featuring RLD Records, Leaf Dog, BVA and Smellington Piff, as well as lots of local hip hop talent! How did you get involved in this event?

Mr.P - No doubt, that's going to be an amazing night!!!! Did a gig a while back for Hari, top geezer! I saw that he was organising this gig, I had that weekend off, so thought, great opportunity to network and get involved in an amazing night! So I emailed Hari and luckily, got offered to host the event which is great! 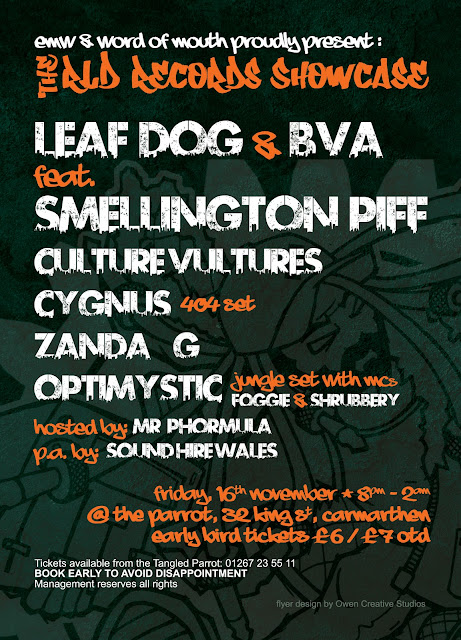 J - So what's next for you now, any future tours, records, collaborations we can look forward to?

Mr.P - Lots in the pipeline! New EP next month featuring Sonny Jim, Dr Syntax, Skamma and many others! Gigs all over the shop! Tours, workshops, flat out musical goodness!

J - A difficult final question. What would you say has been the highlight of your career so far?

Mr.P - Performing in NY, meeting Rahzel, driving a Pontiac around LA in a music video with Daedelus! Those two defo stand out amongst many others!!!


"I'm able to speak two languages fluently so I'd be a fool to not use both languages in my music to help me stand out from the crowd."

J - Amazing! Massive thanks to Mr.Phormula for taking the time out to do the interview, and give us an insight to his busy life!

Mr Phormula's tracks, productions and performances as well as some super slick beats for sale are available at his website (http://mrphormula.com/index.php). You can also follow him on Twitter (https://twitter.com/MrPhormula) and Facebook (http://www.facebook.com/mrphormula?fref=ts), for updates on tours, releases and general Mr Phormula happenings. Check him out people!!

Following the interview and reflecting on his super slick bilingual, verbal dexterity, killer productions and insane beat box skills, I have come to the solid conclusion that Mr Phormula is nothing less than a ray of musical sunshine out of a traditional, gloomy, North Wales town. Not only is he a multi talented and an extremely focused and determined musician, he is one of the ever decreasing population of genuine musical artists out there that are in the industry for all the right reasons. He proves with passion, motivation, drive and persistence, you can be who and what you want to be no matter what background or community your from!

Ed’s enthusiasm for his work is infectious! The musical workshops he conducts from his business 808, are truly inspiring and long over due in Wales! He obviously gets a lot out of supporting, developing and inspiring musicians of all ages! Encouraging them to be individual, creative and experimental, as well as promoting the Welsh language at the same time! Genius.  Mr Phormula is now indisputably a musical force to be reckoned with! He should be inspiring us all to get out there and influence the music industry. No more excuses people, the Internet, social networking, local music venues and open mic nights are all bursting with undiscovered talent! Support local musicians!