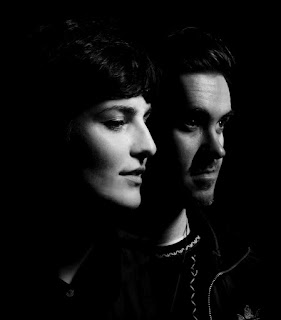 Two new faces have emerged on the electronic music scene in Wales over the last year who go by the name Face + Heel. An exciting mix of electronic rhythms, warped vocals, traditional songwriting and atmospheric synthesis make up the heady sonic mix. Read this brief interview and check out their live show at one of many upcoming shows!

EMW: You've had a busy year! What has been your highlight so far?

SM: Boiler Room has to be a massive highlight, not many people get to experience that in there first few months of being a band. Although it was awful because I realized an hour before sound check I'd picked up the wrong computer and had in fact taken Lukes by mistake! (The computers are identical). Luckily we had by a stroke of luck copied an old project on to his computer but had to quickly edit it up to date!!! lets just say it didn't exactly help with nerves.

LT: For me headlining Boiler Room. It was nerve wracking as it was only our fifth performance. That and supporting Orbital in Moscow, which was a pretty surreal experience.

EMW:  You're currently working on an EP. At what stage are you at and what can we expect from it?

LT: Well, apologies for being cryptic, but if you'd asked us that a week ago we'd say it was just finished and we were picking the tracks. But it looks like something different is going to happen. A little more advanced than we anticipated. Can't really say more at this stage though. 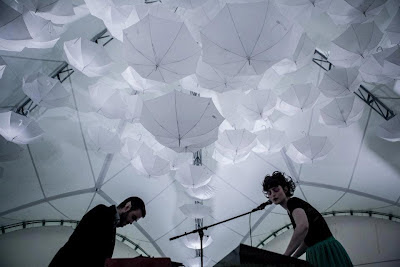 EMW: Your live show involves both of you and a lot of live instrumentation and fx. How easy was it to settle with your current live set up and are you happy with it as it is?

LT: We rehearsed a lot before starting to play. Recording was actually pretty secondary, which I suppose is a little odd for electronic producers.  More like a traditional band. But I think that worked in our favour. As lots of really great producers seem to struggle a little bit live. We're always trying to refine our live set up. So it can be more and more spontaneous. We marked out lots of hardware recently. But we're holding off as we figure if we earn enough to buy it maybe we'll get it free.

SM: Originally for me the live element was what I was more focused on I remember seeing Henrik Schwarz and Bugge Wesseltoft at Roni Scotts with Mount Kimbie as support years ago and it just changed my life. I was like "I WANT TO DO THAT!!!" So originally I was going to make the piano much more of a feature but meeting Luke other elements came in to play like his song writing background so vocals became much more a part of our sound. Mixing songs with electronic sound-scapes. You can also imagine how ecstatic I was when the first person I wrote to was Henrik Schwarz UK agent (Ali Warm) and he got back to me straight away.

EMW: You have a few upcoming shows. Where can people hear you perform next?

FH: We're playing with o0o00 at Start The Bus in Bristol on Oct 19th (event page). Then Swn Festival at Buffalo Bar on the 20th.  Then with Breton at the Scala on the 24th and with Plaid at Concorde 2 in Brighton on Nov 17th. Really looking forward to that last one as we are big fans of Plaid. EMW: How important is live performance for Face + Heel? Have you always been performers?

SM: We make sure our live shows are really something. as you mentioned before we mix live instruments with samples and live vocals so i guess we're really more of a band in that sense. although our set is continuous like a DJ set so people can really loose themselves in it. I really hate how bands stop and chat between songs. I was like to Luke We're never doing that! Ha!

LT: It's everything to us. We absolutely love it. We sort of figured out the logistics and how to do it behind closed doors so it's pretty honed on the technical side, and you can't beat hearing the physical push of one of your own tunes through a big system with people there enjoying it. Also, we sound mix it live onstage so we're not really to reliant on sound men etc. which  is pretty useful.
We're both performers. Sinead studied at conservatoire level as a pianist and I've played guitar in bands since I was little.

LT: More of the same. We'll be working with some pretty mind blowing people in the coming months, so we're excited about seeing what third party brings to our sound. Also lots more gigs and a video or two. Possibly even a short film with a couple of brilliant filmakers who made our no stars video. If we can all agree on one idea ha!

SM: Yes, I can't wait to show everyone our latest tracks as I really feel FACE+HEEL has very much dropped it's sound now.

For bookings contact ali@elasticartists.net. Buy 'No Stars' over at Juno. Thank you to both Sinead and Luke for taking time out from their busy schedule for this interview.
Boiler Room Concorde 2 Elastic Audio electronica Face + Heel Plaid Scala SWN