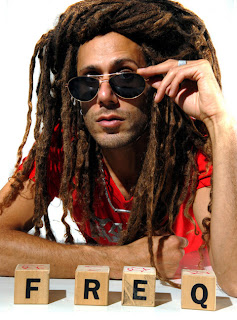 A legend of Bass music who has graced many a dancefloor with his hyper fuled djing skills and dope productions. Currently on a journey through the land of bass, Freq stops by to talk about his movements and future events! The Yoga of Bass workshops anyone? Read on to find out more.
HG: Welcome to EMW! Please introduce yourself to our readers.

FN: Hi I’m FreQ Nasty, ( Darin McFadyen)  I’m a Producer and DJ. Born in fiji, raised in New Zealand and lived most of my life since then in the London, UK. I Currently live in the US.

HG: From the days of Botchit & Scarper to the Dread at the Controls material released most recently, do you feel, as a producer you are moving in the right direction?

FN: I‘m not sure if there is ever a “right” direction for an artist. It’s more about moving forward in terms of production sound and trying new things to keep it interesting and relevant to my current fans, and for new fans too. I know that’s what I like in my favorite artists.

HG: I caught you playing a set years back in Carmarthen town, Wales, at an old club called the Riv with the Analogue People. Do you remember?

FN: Yeah I do , That was awesome. Must have been 2006/7 or so? I was playing a lot of Ragga Breaks and Dubstep back then and I got the feeling it was a new sound for Carmarthen… didn’t stop you all leaping about to it tho. Good times!

HG: Your sound has progressed so much from back then. What made you change direction in your productions?

FN: The same reason I stopped playing Dubstep a few years ago. I got sick of the standard Breakbeat dancefloor format and every one was playing it. It was great that it had become so popular but I felt the scene had lost a lot of it’s creative juice and bootlegs seemed to have taken over. When the bootlegs rule any genre then it’s time to change it up and move on.

HG: What is the latest piece of equipment or software you are most hyped about at the moment?

FN: I don’t use a whole lot of gear. Like most people I run a Mac Laptop, some kind of DAW (Logic Pro in my case), and the Native Instruments Komplete package which gives you the Massive, and Reactor synths etc and I use some UAD plugs too. I’m more hyped about working in new styles and genres than equipment as even most of the cheap gear everyone is using these days is of an incredibly high standard. When good cheap gear is available to everyone then it is more using what you do have well and being creative than being a gear monster.

HG: You are working with some great artists at the moment with your most recent release Bon Merde getting some heavy remixes from the likes of FS, Liquid Stranger and BREED all involved in the excellent High Chai records. How did you guys hook up?

FN: Dimm Summer who runs the label also made my website and logo so we met up that way thru David Starfire, a West Coast artist who is a good friend of mine. I really liked the Asian twist they had on Bass music, and their straight up Dubstep and Bass releases were dope too, and it just happened from there. He’s a fellow future head and Bass Geek. 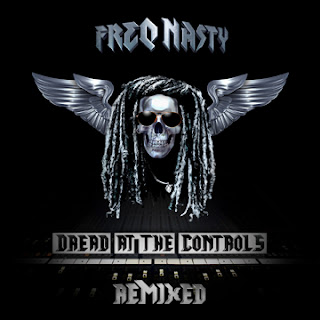 "I just did whatever I wanted to without worrying about genre’s or sounds what’s hip. Consequently it is a little unusual and sits between obvious genres, but I am happy to be that guy that isn’t so easily pigeon holed." ~www.FreqNasty.com

HG: Please tell us a little about your forthcoming release as Dread At The Controls.

FN: It’s the first tune I had done for a long while after taking some time off studying. I just did whatever I wanted to without worrying about genre’s or sounds what’s hip. Consequently it is a little unusual and sits between obvious genres, but I am happy to be that guy that isn’t so easily pigeon holed.

HG: You also have a new label, Freq Nasty Records. What's in the pipeline?

FN: More stuff by me and my mates basically. I did the ‘Low FreQuency Pureland’ EP late last year and  I’m working on more stuff for the label now. Future forward stuff that doesn’t necessarily fit into one genre.

HG: Will you be performing in the UK this year?

HG: What can one expect from your live set?

HG: Which event are you most looking forward too this year?

FN: Glade and Secret Garden I am really excited about. I’ll be doing workshops I’m calling ‘The Yoga of Bass’ as well which are about the interface between Bass music and meditation just to keep it interesting.

HG: Top 5 tracks of this year so far?

Minnesota -  Drop it to the floor (dub)

Avenged 7X – Welcome to the family

Many thanks to Freq Nasty for the interview and Sonia Push once again for the hook up. Don't forget to grab the free Dread At The Controls track over on his Soundcloud.