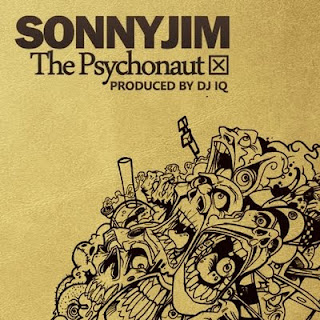 UK hip hop is spreading its wings. Eatgood records are hooking up with Australian label Obese records to bring forward this heavy release from Sonnyjim. Sonnyjim has been connected with Cardiff hip hop crew Associated Minds for a time working with producers such as P.L.O on 'the Heat' and featuring on the classic Mudmouth & Metabeats track 'Maaadtight' alongside Skamma MC. He's performed at the legendary Higher Learning that will be making a return to the capital tonight at the prolific CAI venue with Caskade's album launch and DJ sets from Kaptin, Jaffa and Aamer.

Taken off the forthcoming Psychonaut LP the title track 'The Psychonaut' comes with crazy synth and a knocking beat featuring production from DJ IQ, who will be known as being Professor Green's DJ in arms. In the words of Eatgood records:

"Psychonaut features Sonny' spazzin out over a synth driven drum heavy stomper produced by DJ IQ. The backdrop sets the pace off perfectly for the impending LP release."

The LP will also feature a track taken from Jehst's 'Feeding Time In The Zoo' called 'The Moon' and probably the biggest collaboration on the album with the M-Phaze produced track 'You Aint Ready' featuring Prince Po, known for his work alongside Pharoah Monche as Organized Konfusion. This is a worldwide collaboration and needs the time. Sonnyjim's flow cuts through each track and begs for head nodding. The LP is getting released July 2011 but in the meanwhile pick up the digi single through Eatgood's Bandcamp. There's a couple of remixes on there that will cater for the dubstep and drum & bass heads out there.