Wishing you a 'Trwbador' Christmas! 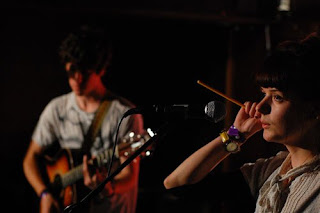 Nadolig Llawen/Merry Christmas! I hope you are all keeping warm on this very festive Christmas day? Today is meant to be a time for happiness and cheer, giving and sharing and I can not think of a greater gift than that of music, whether it be the gift of talent to play an instrument or a lovely free download from the duo Trwbador available on their website http://www.trwbador.co.uk/, music will always help us get through even the most craziest moments in our lives... let's be honest here, Christmas is really all about the freebies! Jump over to their website, enter your email and grab the track 'Y Ferch Nadolig' a lovely slice of Welsh pop with Angharad aka Avan Rijs' haunting vocals and Owain's accompaniment on vocals and acoustic guitar placed over a really cool drum machine rhythm with all the appropriate bleeps and synth sounds sprinkled in for good taste, this is the perfect soundtrack to a snowy Christmas morning. Oh... and once you have done that come back here and read this interview with the ever musical duo about their new label Owlet Music and plans for 2011.
HJ: Hello and welcome to EMW! Please introduce yourselves to the blog.

Owain - I was concieved during a wet and windy night in May, there was not much on the television and my parents had some time off work so conditions were perfect.

HJ: You described your sound as Folktronica. Where do you draw your influences from when bringing new ideas to the table?

Owain - It changes all the time, right now it's got to be the old Ginger bloke that was on Trisha a couple of weeks ago. He was convinced that his son wasn't his own and had tried having sex with his sons wife while he was in jail... it's better than it sounds.


"We're trying to work very closely with a small number of artists, it's not ever going to become Island records or something like that."

HJ: The Owlet Record Label (http://owletmusic.com/) is something that you're involved in? What can we expect to see happening with this?

Owain - It's a label we started a couple of months ago. We started it as a platform to release stuff for Trwbador but have basically become more excited about releasing a couple of other people. We're trying to work very closely with a small number of artists, it's not ever going to become Island records or something like that.

Angharad - Yeah. Keep an eye out on the Owlet news, we've got four releases happening between now and March!

HJ: Who else will be getting released on Owlet?


"We're going to release a compilation in the next month featuring quite a few Welsh artists. It focuses on bedroom DIY music."

HJ: Your sound is peppered with drum machines and other electrical noises. Do you have a nice selection of toys to play with in your studio?

Angharad - Most things we do/use is borrowed equipment. stealing a couple of my little sisters toys here and there to play with.

Owain - Harry's (Angharad) got a loopstation which were starting to play with more and more. Can do some cool things with that, she uses her vocals as an instrument a lot.

HJ: Do you find yourselves writing in a different style for your Welsh songs compared to your English songs?

Owain - Not generally, at the moment because we're writing more Welsh songs to stricter deadlines so they're turning out quite pop like.

Angharad - Hoping in very near future with our second EP we'l be having more time to spend writing it, resulting in more interesting ideas/compositions.

HJ: How do you approach writing your songs? Do you have separate roles or is it a free for all?

Angharad - A bit of both. Owain had a lot of the ideas for the first demo EP because it was for his UNI project, but now I've started writing more songs. One of us will have written the basis of a song and then we both develop it.

Owain - We're still figuring out. We've realised for Trwbador we need to have songs written before we take them to a sequencer or we just get lost.


"We've got a Welsh BBC Radio Cymru thing coming up called, 'Unnos' where we have to compose and record an EP in one night (aaaargh)."

HJ: As for future projects, what can we expect from Trwbador in 2011?

Angharad - We've got a Welsh BBC Radio Cymru thing coming up called, 'Unnos' where we have to compose and record an EP in one night (aaaargh).

HJ: Who or what are you really excited about at the moment in the music world?

Angharad - At the moment listening to artists signed under 'Bpitch Control' which are really exciting me at this time, and the founder of the label 'Ellen Allien' whos solo work I have been listening to for a long while, and done a remix of her tune for my Avan Rijs side project. Its on sound cloud, Avanrijs Soundcloud

Owain - Control I guess. The fact that people can now record, produce and release themselves is really empowering. Some really interesting music is coming to the surface form people who just work with these tools alone in their room, free from interference from commercial foresight and all that malarky.

Owain - Broadcast, Kate Bush (Never Forever album), Telefair & Vera Gogh (I know it seems like I should say that but they really are), Deerhunter, Cornelius, Soft Machine.

Owain - Lot's of money, red wine, pork instead of turkey and no christmas pudding or any of that dirty cake,

Angharad - I don't mind, anything is nice as long as im not hungover.

HJ: Favourite venue in Wales at the moment?

Owain - We've hardly played many. Buffalo I guess but that's more for the people who put the gigs on and do the sound, they're generally really cool.

Angharad - Yeah I'd say Buffalo too, they've always been really good to us. 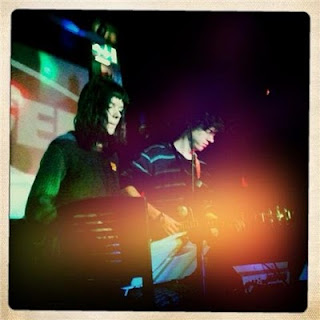 HJ: You played SWN festival (http://www.swnfest.com/) this year? How important do you believe festivals like SWN are to you and to music in general in Wales?

Owain & Angharad - SWN is definitely a great thing. It's by far the biggest audience we've ever had. All the best Welsh bands and others playing all over the city in all the best venues. What more could you want really?  There are some other really good festivals in Wales but I think SWN is the best for giving new bands opportunities and supporting new music.

Owain - Tea or red wine or port or tranquility tea or flat white.

Owain - We're playing a gig for Huw Stephens in London on the 11th of Jan....We've got this Radio Cymru Unnos (Welsh language website) thing in Feb then in April we're playing Clwb Ifor Bach.

HJ: Would you like to shout out any other acts, friends, family, pets please feel free!

Owain & Angharad - We'd like to shout out to Adam Walton, he's got a show on BBC Radio Wales every Sunday between 10 - 1am. He's definitely one of the most important people in the Welsh Music Scene. We've had a lot of help over the last year from Owain Rodgers which has been awesome of him. C2 also, they are all great people and have been really good to us. Liz and 'The School' been seriously cool to us. Huw Stephens and Bethan Elfyn have been very supportive, bless 'em. You should all check out, Jangle and Drafts. Two bands from Newport we're friends with.
Thank you for taking the time out for this interview. Don't forget to download the track 'Y Ferch Nadolig' from the Trwbador website (http://www.trwbador.co.uk/), all it takes is an email. Nadolig Llawen!
Adam Walton Drafts Huw Stephens Jangle Nadolig SWN Telefair The School Trwbador Vera Gogh welsh music