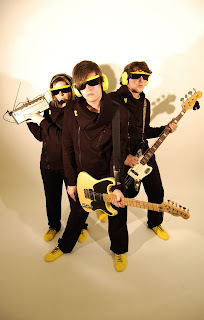 There is something about uniformity in bands that really drives home what their sound is about. It's another level of commitment on behalf of the members and I believe helps the unit as a whole keep themselves together. Kraftwerk would not have been the same if the four of them had decided to slum it in shorts and t-shirt, the same as SCV would not have such a strong stage presence if they all turned up in their everyday clothes for gigs. Now I'm not suggesting that it is essential for a group to have an 'image' but it definitely makes things a lot more interesting for a live show. Please welcome a different approach to music making and performance in the form of Stuart, Pixie and Jack also known as Super Cute Voices...

HJ: Hello and welcome to EMW! Please introduce yourselves and give a little background for those who might not know your work.

Stuart: Hello! We’re Super Cute Voices, a 3 piece New Wave Synth-Punk band based around Carmarthenshire despite the fact only one of us lives there. We’ve been together in this form for around 10 months I suppose, gigging whenever we can. We put a lot of effort into our live act; music is about entertainment, escapism. Our Live act is based around energetic music, choreography, props and uniforms. If I wanted to see jeans and T-shirts I’d visit Matalan.

Stuart: Currently a lot of Kraftwerk and Gary Numan.

HJ: What made you decide to start the group?

Stuart: I was a teenage Sex Pistols fan, listening to ‘Never Mind the Bollocks’. Looking through my uncle’s vinyl collection I found ‘Man Machine’ by Kraftwerk and couldn’t believe they were made only a year apart. The two sounds were so different, Kraftwerk really did sound like robots, but both bands shared a dark humor. I pretty much wanted to find a way to mix the two bands, so I bought a synthesizer and started making music. Later came Devo, Polysics, New Wave and Super Cute Voices was born.

Pixie: I was invited to join the group in early 2010, I jumped at the chance! Ive always liked the music Stuart composes for Super Cute Voices, so how could I say no? I already had some stage choreography in my head

Jack: Its all Stuarts idea, he was looking for a bass player, I heard his music and loved it, and really liked the idea of a proper stage show and costumes so I joined!

HJ: You have an interesting dress sense when it comes to your live show. Where do you draw your influence from?

Pixie: We like the idea of uniformity in general. Looking dedicated like a soldier in all his attire.

HJ: Is it true you made most of your costumes using DIY material?

Jack: Most of all the bands equipment is made using DIY material. The whole band is held together with gaffa-tape and spray on glue! 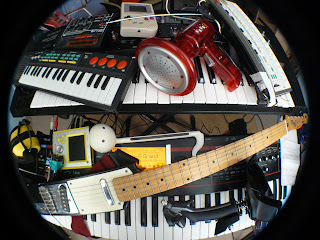 "Most of all the bands equipment is made using DIY material. The whole band is held together with gaffa-tape and spray on glue!"

HJ: You obviously love your toys. What's your strangest piece of gear that you couldn't live without?

Jack: The strobe light in the bass guitar is pretty vital, I guess my fuzz pedal with the built in oscillator is pretty weird.

Stuart: I love using my Gameboy to sequence synth and drum parts. I’m currently building Pixie a 2 oscillator synth made out of an old flight simulator Joystick that Jack donated. Part of one of our new tracks is recorded using a homemade screaming-stuffed-bunny-rabbit-synth too. That’ll be fun live!

Pixie: The festivals are!! Hmmm… but as for the bands getting successful regular gigs to push them forward? Not so much.

Stuart: I think there are definitely a lot of really good Welsh bands at the moment though.

HJ: What's your favorite venue/club night in Wales and which venues do you look up to from elsewhere?

Stuart: I remember seeing Radio Luxembourg in their original form (before they became Race Horses) playing in the then Harleys Bar in Aberystwyth. Amazing energy at that gig, but they don’t have bands there anymore. 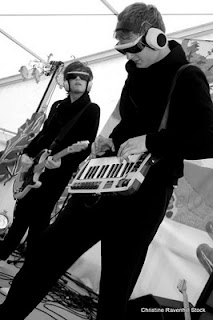 Stuart: Summer Sonic Festival in Tokyo. No doubt! I saw Devo, Polysics and Sex Pistols on the same weekend there! Amazing crowd, amazing venue. SCV live at Budokan has a good ring to it too.

Jack: Went to a classical gig in Europe’s largest underground lake in the caves of Drach in Mallorca, all the musicians were in boats floating down the lake in the dark,that was pretty awesome!

Pixie: Outside on a big patch of green with the wind blowing my hair about on an uneven DIY stage whilst playing to a few people sitting at picnic benches…. 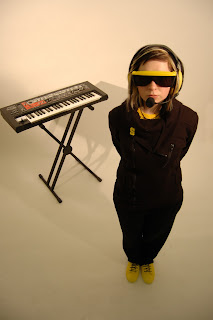 "Constantly progressing and inviting new and more exciting ideas into our set, hopefully some background visual accompaniment in the near future."

HJ: What can you see happening in the near future in terms of your live act and gigs?

Pixie: Constantly progressing and inviting new and more exciting ideas into our set, hopefully some background visual accompaniment in the near future.

Pixie: That I’ve been to, Beach Break Live.

Jack: Small nations music festival, cos its 5 minutes away from my house!

Stuart: We use energy drink to keep our energy up live, but we’ve got through 3 crates, it’s getting pretty bad tasting by this point. I like Milkshake!

Pixie: http://www.myspace.com/owlet.music - Newly established record label. Promo-ing one of our songs at the end of this year.

Pixie: Yes, with the handy and helpful copy and paste tool!

Jack: I will now you’ve interviewed us! 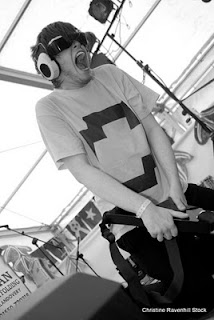 "At the moment we’re in the middle of recording a load of new songs, as Pix mentions, we’re releasing one of them on a compilation album by Owlet.Music. We’ve got a gig coming up in the student union in Aberystwyth on the 14th of December which should be a fun one. Let’s New Wave!!"

There you have it. Remember to keep an eye out for SCV performing in your area and make sure you have a listen to their latest offering. Grab a free download of Furry.