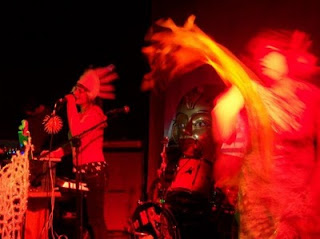 Sometimes I have to stand back and take a look at how much the internet has changed the way we can keep in touch with people, music, art and news. This interview with Little Eris is a perfect example of the internet working as an interactive magazine where at a click of a mouse you can not only read what's going on in the artists life but also hear and see the work that is being talked about. Also the idea that after a brief meeting at a night and swapping contacts that this interview came together so damn easy is a testament to the wonders of electronic communications in the 21st century. Of course the internet is nothing without the people behind it making and enjoying the music and art talked about on this blog (and others) and so I'd like to say a huge thank you to Little Eris for taking the time out to answer the following questions after only the briefest of meetings. (I'm going on about the internet because I don't have it at home at the moment and realise how difficult (not impossible) it is without!)

04 Karma to You by little eris


HJ: Hello and welcome to EMW! Please introduce yourself and give a little background for those who
might not know your work.

LE: Um, shit... well i have been listening a lot to the radio, what a pile of crap most of that is. I have also been listening to my boyfriend's CD's in his car but they are mostly skipped. LOL. The last thing i listened to today was a track called Predator by Cardiff artist Ninjah, and another track he produced with a Cardiff electronic producer called FlapSandwich called 'Dance like an Indian'.

I played those on YouTube to my friend who was interested in hearing Ninjah's songs. I spend a lot of time without music because I hear music in my head a lot and also create soundscapes from what is happening around me. I also like to listen to ResonanceFM the London arts radio station online there is a massive variety of music in there. From Muslim Hip Hop like Poetic Progress to soundscapes recorded in German scrap yards. Tis random!

HJ: Tell us a little bit about your creative process/what you use?

LE: For me the creative process is completely different every time. A track can come from just strumming a guitar, or from laying down some beats and loops and then putting layers of lyrics or instruments over that. Sometimes I will just have a line in my head or I will have been humming a tune. If I have something very hooky and I don't want to lose it I will record the melody on my phone. I use a basic a sound editor for vocals and instruments but I put them through a Line6 Toneport to create different effects, I do most of my beats and synth sounds in Reason4. I have an amazing Fender Zone bass a pink Fender strat copy, and an Evolution midi synth.

LE: I am influenced a lot by the sounds around me. I am inspired by high energy in the atmosphere. Sometimes I am compared to particular artists and then I will check out what they are doing - to me it is like an affirmation that what I am doing is ok. Is this is inspiration? It's like I always seem to find these artists after I have written music in a similar style or after I have thought of ideas that can be compared to theirs - like backwards inspiration...!? I am inspired by feelings and the sweet soul harmonics that I experience when I am on LSD! Like a miniature internal accordion with the most amazing chirruppy sounds. I am inspired by good feelings.

LE: I feel I am not really in a position to comment. I do my own thing and now and again I come across kindred spirits and then I like to support their projects. I think we are lucky to have Adam Walton on Radio Wales who plays a lot of bands first demos. It can give an artist a huge boost to be played on the radio, I think he does a really good job. I think Nick who runs Spillers Records is a legend. It is people like this who keep the scene alive. The people who are reaching out to the musicians and music fans of all ages. Also all the photographers, writers and promoters and people who are up for going out to party and explore new scenes. I don't really like scenes, I tend to try not to be in a scene and I like to pick and choose the best bits from the scenes that are out there. I live in the Wales' capital city and there is not that much here that gets me really excited, now and again I get a nice surprise though.

HJ: Do you feel a pressure to move out of Wales too succeed as an artist?
If so, where and why?

LE: I don't feel pressured to move out of Wales but I do think being in London would be useful. I spent time in London last year and I met Toby Woby an amazing musically spirited person who has been very supportive and has really helped me. Like this year I have been on the same bill as Viv Albertine from The Slits and Kirsty Hawkshaw from Opus Three. And I performed in The Foundry in East London which was started by Bill Drummond from the KLF . Cardiff doesn't seem to have the same depth, it can't really be compared to London as that is such a huge city. We do have some great legendary bands here like Llwybr Llaethog and Super Furries who are pretty accessible. I like living in Cardiff but if it wasn't for my band being based here I would probably be better off in London. Hopefully is it possible to be based anywhere and still achieve creative satisfaction, which is what succeeding as an artist means to me. Ultimately the UK is a small place with probably the best underground music in the World so in theory it shouldn't matter too much where you are located on this small island.

"Ultimately the UK is a small place with probably the best underground music in the World so in theory it shouldn't matter too much where you are located on this small island."


HJ: What's your favourite venue/club night in Wales
and which venues do you look up to from elsewhere?
Where in the world would you most like to play?

LE: I don't go to the same places regularly but in the past few months I have great nights out at The Backroom a wicked underground club in Cardiff Bay, I have also had a good night in the Gwdi Hw Gwdi Hw and Tony's Kitchen Gallery. I really like The George Tavern in East London it has a decadent bohemian atmosphere with great acoustics lots of candles and lots of characters.
I really want to go New York to East Village, I started reading about the place after learning that's where Genesis P-Orridge from Psychic Tv and Throbbing Gristle lives. It's full of artists and squats apparently. It sounds cool, I wana play there!

LE: We played at a Microbeer Festival in mid Winter. The event was staged in a courtyard under sheets of tarpaulin. The rain had been hammering down for days. By the time we went on the tarps were heavy and full of water. I was standing in a puddle on a pallet. My laptop was on a pile of crates my keyboard was wrapped in this clear plastic poncho. My bass amp was in a pool of water all my leads were soaking. Most of the other bands had pulled out. I like a challenge though and we had a really fun gig and luckily no one got electrocuted and all the gear survived. It felt like being in the trenches or something, or in the ghetto, just with fairylights and beer.

"Most of the other bands had pulled out. I like a challenge though and we had a really fun gig and luckily no one got electrocuted and all the gear survived. It felt like being in the trenches or something, or in the ghetto, just with fairylights and beer."


HJ: What can you see happening in the near future in terms of events and releases for yourself?

LE: I have a pile of tracks that I have been performing live that I haven't laid down as proper recordings I really want to catch up with this. I want to do a music video for my track called 'Catmoth'. We really want the band playing at a few festivals but we were so busy at the start of the year as the main support on the Viv Albertine tour that we missed the deadlines for that now. But hopefully we will get on one or two. Little Eris music is great for festivals, very happy and colourful with bubbles! I also hope to start working more with more experienced producers who can take my files and master them, I would like to take the production of the songs up a level.

LE: I really got into Psychic TV last year I am usually behind with everything, luckily I discovered them just in time to catch their last ever gig in November! I also like the music of Welsh band Son Capson. I am looking forward to this year seeing John Farah in Wales. He is coming from Canada to play some dates in the UK. He plays slamming breakbeat electro drum and bass jungle tunes with jazz piano over the top. Pretty unique.

HJ: Any other shouts, links etc ?